Dismissed and abandoned for 70 years, New Mexico residents who lived near the site of the first detonation of a nuclear bomb suffered in silence - until now. To contribute and be a part of this historic documentary film project, please click on Support the Project.
Posted by Unknown at 7:57 PM No comments:

Ignored for Decades, New Mexicans Suffered in Silence - Until Now 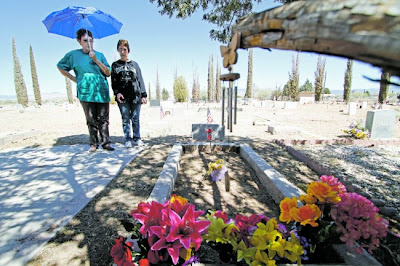 Trinity July 16, 1945
Seventy years after the United States launched what some describe as a surprise nuclear attack on the citizens of southern New Mexico, residents there feel they have been abandoned by their government and left to deal on their own with three generations of what appear to be radiation-induced illnesses and deaths that have left few families unscathed, and that continue to this day.

With your help, our feature-length documentary film will tell the story of these forgotten and apparently expendable Americans. and perhaps bring about recognition and compensation for their sacrifices. The ranchers, citizens of small towns and the Mescalero Apache community, scattered in some cases within 10 miles of the first detonation of an atomic bomb on July 16, 1945, were at the epicenter of an epochal historical event - the unleashing of the unparalleled might of the tiny atom. But little has been told about their decades of suffering since the blast. 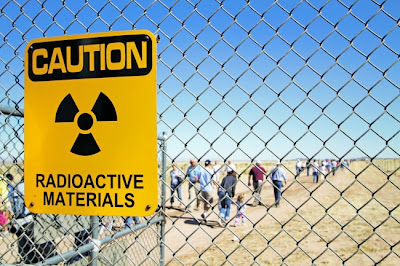 A sign posted by the Defense Department warns Trinity visitors of possible dangers, even now, more than 60 years after the detonation of "the gadget."

We know of the suffering of the citizens of Hiroshima and Nagasaki, but few are aware of the deaths and illnesses the U.S. apparently inflicted on its own citizens before the bombs were ever dropped on Japan.

“The rising fireball was "the biggest thing I had ever seen in my life. It was rolling, getting fatter and bigger and taller, one Trinity witness recently recalled. (http://reut.rs/h7SUi0) "My mother said: "The sun is coming close. The world is coming to an end." She told me to drop to my knees, but I kept looking. If it was the end of the world, I wanted to see it. I was waiting for God to come out from around the ball of fire."

A recent 10-year study by the National Centers for Disease Control and Prevention confirmed that the New Mexicans on ranches and in surrounding communities were never warned of the impending blast. No one was ever evacuated, and no precautions were ever advised, either before the blast or since, regarding the safety of their health, the water or food supplies.

The Trinity downwinders fear that their communities are still being poisoned by toxic remnants of the Trinity detonation set off by Manhattan Project scientists on what is now the White Sands Missile Range in south-central New Mexico. They have generations' worth of evidence that something is very wrong.

Posted by Darlene Olivia McElroy at 7:15 AM 2 comments: